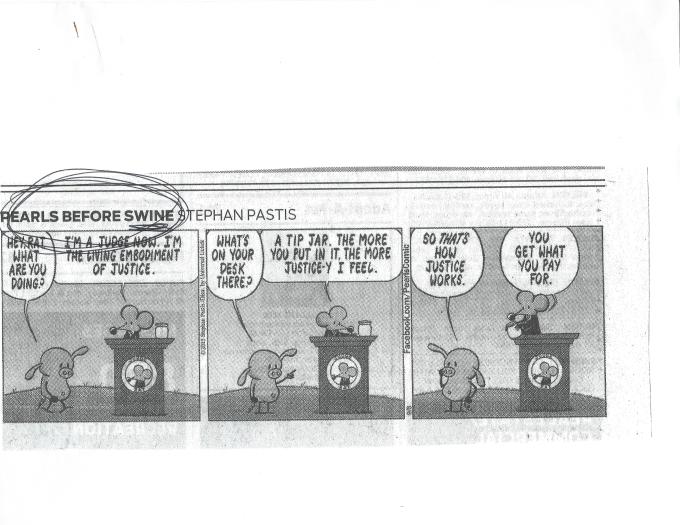 You read a little of ‘judge’ # 6`s behavior in a previous installment, now you`re going to get a little in depth knowledge into his twisted thinking……

As you continue to read this episode one thing will jump out at you repeatedly, all the “judges” except one, just kept repeating what the ‘judge’, and/or ‘judges’ before them said, nothing they added was ever new…….they just regurgitated what the one before them said or did……

On page 2, as a footnote, #6 ADMITS the defendant, Debra, submitted NO Certification in her accusations, and False statements against me !! Think I would have gotten away with it ??!!

On page 6, # 6 stated, that for me to be ‘re-instated’ in my case, (and just in case you forgot, I AM the Plaintiff), I had to meet two conditions;

1a. That I had to pay Debra`s lawyer`s “Counsel Fees”, even though Debra contracted for this !

2. That I had to be in compliance of the “discovery requests”

Haven`t we heard that song before, many, many times before ??

In any event, if you have been following my Blogs, you already know that I complied numerous times, AND all those fees were PAID. Actually they were stolen from my daughter`s ITF!!

She would have done it too, except I stopped it !!

But what the heck, to these ‘honorable’ ‘judges’, truth and facts don`t matter !

My lawyer and I, as I said in a previous installment, were so completely prepared, that the case SHOULD have been dismissed, but not against me but against Debra…..It would have been a no brainer, if we were allowed to show the evidence and had we had an honorable judge.

But alas, this is Somerset County Family court, what would you expect……

Additionally, on pages 6 and 7, of “judge” #6`s order, are statements he made that he knew were untrue, as was his assertion about my record keeping.
Then #6 makes the statement, again on page 6, that I “certified I was now mostly in compliance”, “MOSTLY”???

Also on page 6, ‘judge’ #6 stated that I said I did not recall what happened to three bank CDs.

The three subject CDs were listed in the “Forensic” report, and on my own “discovery” sheets, There was a paper trail that followed where the CDs went and who owned them !!

You will see that on 1 May 2017, Debra`s lawyer, Under Oath, testified she did not have a “Forensic” Report, because it was incomplete !!

On page 8, he goes against his own two preconditions for me to be re-instated, just so he can RULE against me !

Are you having a hard time believing this, then get a copy of the “Order”, it`s free…….

A couple of “interesting” statements ‘judge’ #6 made on page 3 of his ‘order’;

1. He admits Debra`s lawyer got the “discovery responses”

2. Makes a point of saying I had five lawyers, But neglects to say that he is the SIXTH ‘judge’,
SEVEN when you include the Assigning ‘judge’ !

On page 4 of his ‘order’, ‘judge’ #6 states, and I quote, I/me, “do not recall/know” statements I supposedly made about financial transactions totaling $XXXX…..

Number 2, How can you have a “slash” in a quote……the guy was ad-libbing just to make me look like an ogre.

Not only did ‘judge’ #6 cheat me out of my evidence, what he did next, should have had him examined for his mental stability, or lack of……..

Every time my lawyer tried to speak and/or show my complete compliance with all court orders, this mentally unstable ‘judge’, yelled at and berated my lawyer to such an extent, that I feared for my lawyer.

Never did I see a grown man, like my poor lawyer, treated in such a manner or so abused in public.

This “judge” was so irrational and unprofessional, that I question his Sanity !!!

I knew at this very moment, my lawyer was useless. He was so frightened of the ‘judge’, he wouldn`t even stand up for himself against this mentally challenged ‘judge’….

No question, the inmates are running the asylum !!

Still think this ‘judicial’ system is not crooked, and corrupt ?

“Lead the Lamb to Slaughter”…….