Before I let you in on all the gory details of this “hearing”, you need a little background info…..

My lawyer, requested a weeks delay of this hearing because he had a planned family vacation.

Knowing this, I decided to take a little trip also, assuming the ‘judge’ would let the poor guy have a week off.

Remember what I said earlier about “judges”……

The ‘judge’ refused to give my lawyer a one week delay………..this, after ‘D’s lawyer got multiple delays prior to this and at later hearings !!!

You will see shortly why all this preamble matters.

I wasn`t there, and neither was my lawyer…but alas, I was “represented”, by my lawyer`s “competent” boss …

When you read page 9, lines 10 through 17, of the transcript, (attached to this Blog), you will understand why my lawyer was refused a weeks delay. (The entire transcript is a public document….before you read it, take an antacid …….)

This guy, my so called rep, went to great pains to STAB ME in the BACK !!

On top of this, he Mocked me for having a copy of one of the checks used to pay ‘D’ the settlement she agreed to 2004 !!!

What are these creatures taught in law school ?????…. It`s certainly not ethics, or integrity !

Are you all catching on to how the “game” is played ??

Don`t worry if your not, there is whole lot more to come, a whole lot !!

Obviously, her, the ‘judge`s’, decision was against me……Suprised ??

Apparently my lawyer was there, but oddly enough, I have no record of being notified….Hm-m

This “Civil Action order was to allow ‘D’`s lawyer access to my safe deposit box at PNC Bank.

In the next installment, what I am going to tell you about the ‘performance’ of ‘D’`s lawyer at the day of the “inspection”, at the bank, in front of a lobby full of people, you would think Me and my family committed a capitol crime, it will make you hysterical.

I`m attaching this “C. A. Order” to this blog so you can see multiple handwritings on it, something that I told you previously was never supposed to be coming out of Somerset County court.

In a future installment, I`m going to show you multiple signatures of this ‘judge`s’ name on various court orders coming out of her court room !!

And that`s just the beginning ! 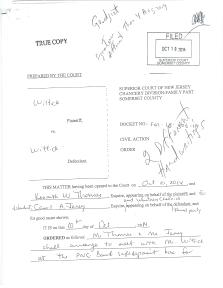